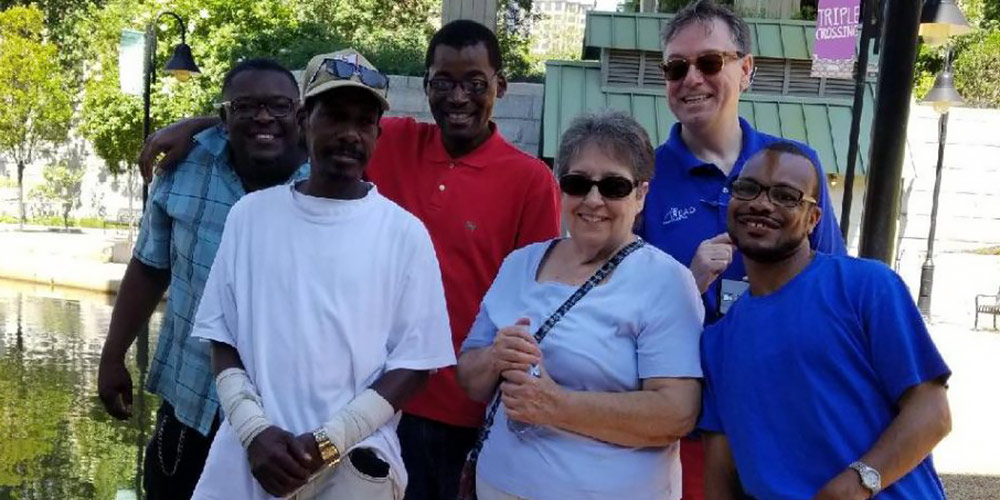 Oh, no! The Elfstedentocht (Eleven Cities Tour), a 135-mile ice skating race on the canals of Friesland province, haven’t been held in over two decades because it no longer gets cold enough for the canals to freeze over!  READ’s Franklin Library class learned all about it in the pages of News for You, as well as a bit about dikes along the way.  Richmond was once a bustling canal city, and today boasts its own dike!  Who knew!  Well, now this READ class does.

Ask anyone in this class whose idea it was to build a canal from Richmond to what is today West Virginia, and they will tell you it was George Washington who first introduced the idea to spur commerce in Virginia.  And ask them how a canal works, and they will tell you about the locks that bring a boat up or down to a different elevation as a way to bypass falls or cross dry land to a different body of water.

Thanks to the almost 30-year old restoration of a portion of the former James River and Kanawha Canal—and READ’s supporters, who make field trips possible—we were able to go beyond book knowledge of canals and dikes by boating along Richmond’s own canal and traveling through one of the gates of Richmond’s dike, commonly known as the floodwall.

Research in the library’s second-floor computer lab yielded an abundance of historical background and current tourist information.  Tobacco, which we learned doesn’t start out as cigarettes, needed to be shipped to Richmond; food, clothing, and furniture needed to be shipped west.  YouTube provided a demonstration of how locks work and videos of the Erie and the Panama canals in action.

If 2,000 years ago all roads led to Rome, today we now know that all bus routes lead to Broad and 4th.  On GRTC’s convenient “Trip Planner,” which is linked to Google Maps, we plugged in our starting point and destination, the date of the trip and time we wanted to arrive at Riverfront Canal Cruises.  We discovered the walking route from the library to Broad and 4th, what time we needed to depart, how far we’d have to walk, and how long it would take us.  Then, once there, what bus to take and where to get off, as well as the final few walking steps.

July 9.  As I walked up the library ramp, I saw first tutor Sue and then Jammar, Calvin, and Lavado.  A few minutes later James arrived and handed off snacks he bought for all to share, but he was having trouble parking.  Tim arrived right at the designated time of 10:15, and James, who had not returned from seeking a parking space, texted that he was going to drive to the boats and take his chances down there.  At 10:23, we set out, and encountered Rashad walking up Franklin Street.

Me: Rashad, we agreed to meet at 10:15 sharp to take the earlier boat because you were worried about having to leave early to go to work, and you can’t leave early when you’re on a boat.  We almost left without you.

Rashad: I took off work today.

Construction alert!  We have to walk around a fence on Broad between 3rd and 4th.

Me: All right, let’s be careful, look for traffic, and walk single file.

Calvin, who leads the way: I know how to walk in the street!

At the bus stop, bus fares ready, the #1B arrived, just as the GRTC app said it would, and we were off, watching both the changing digital sign inside the bus to keep track of our stops and the street signs at each intersection.  As we approached 14th and Dock streets, I shouted, “Someone needs to pull the yellow cord.”  Thankfully, someone did.

In the meantime, where was James?  Finally a text: “Am walking in.”  We spotted him on Virginia Street overlooking the canal and called to him.  And now we were all there: Jammar, Calvin, Lavado, James, Rashad, Tim, tutor Sue, and I.  Our boat arrived.  Overcoming his trepidation, Calvin, our savvy street leader, boarded last of the students.  Off we went.

After cruising along the esses of the canal, under railroads and highways and through the narrow gates of the floodwall, we entered the former harbor of Richmond’s once bustling maritime trade center.  It is here that we spent the bulk of our time, learning about Chapel Island, named for the parish of St. John’s Church, once a home to busy boatbuilding factories, now taken back by nature, watching the turtles sunbathing on logs, and observing geese gaggle structure, the patriarch carefully watching us and later leading his extended family on their own water trip, the wild hibiscus along the shores reaching out to grab us.

Perhaps most fascinating was the great heron.  Our captain, David, told us to be very quiet as he edged the boat in near the shore.  Three times we got within about ten feet of the bird before he flew farther down the harbor.  James snapped a pic of our feathered friend in flight.

At the end of the harbor, we pulled right up to the railroad bridge, and stood to look down to a walk bridge, and beyond that to a lock that still works, and beyond that to what we couldn’t see because it was at a lower elevation than we were:  the James River.  Everyone asked questions.  Interest was very high.  Then we turned around.

On our way back to the canal, a woman stopped her car on Dock Street, seemingly to flirt with Tim.  We all laughed as no one could hear what she was saying.  Back through the floodwall gate.  Back through the esses.  But wait—the captain stopped the boat so we could try to see the replica, surrounded by shrubbery, of the box Henry Brown shipped himself north to freedom in.  We had read about Brown in our research of the Civil War, but until now, no one really understood how small the box was and how difficult it must have been for Brown to endure his 27-hour journey, part of it upside down.

After disembarking and walking along the canal, extending our learning, James left us for his car, Tim called a friend who had planned to pick him up, and Calvin waited for a bus in the opposite direction to take him home while the rest of us boarded the #1 back to Broad Street.  Rashad got off at 7th to catch his usual bus; Lavado stayed on as this was his bus home; and Jammar, Sue, and I got off at 2nd to walk back to the library.  One delightful day!