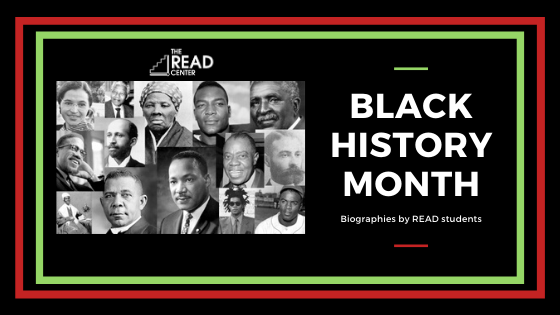 READ students are given the opportunity to write and publish their own work twice a year in the Student Voice. Over the years, these works have included biographies of famous trailblazers. Below are several biographies by students in honor of Black History Month.

Arthur’s parents were of African ancestry. When they came to America from Africa blacks and whites were very segregated. Arthur’s father was a city park policeman. Arthur played tennis and went swimming in the park after hours. Arthur traveled to many tennis camps. UCLA offered him a scholarship to play tennis. He went onto coach tennis at West Point.

I would like to be a person like Mr. Oliver White Hill.  I think he is a great person.  He was a hard worker and a lawyer.  He fought to change unfair laws.  He wanted equal rights for all people.

The Buffalo Woman by C.P.

Cathay Williams was the only know female African American Buffalo Soldier.  She was the first black woman to be documented for her service in the U.S. Army before women were officially allowed to enlist.  She was born in   September of 1844 Independence, Missouri.

Williams herself was born into slavery.  As a child, Williams was moved to Johnsons home, in Jefferson City where she worked as a domestic servant.  At the onset of the Civil War, Union soldiers seized the farm, and the 16-year-old Williams was absorbed into the migrations of the Union Army.

Barach O Bama by Lillie B.

Barack OBama is our first black President.  He is forty-fourth President of the United States  He is leaving the office soon.  He helped our country and around the world.  He also helped to find jobs and helped children to get a good education.  He helped people with their benefits and troops come home safe.

In 1875 Sarah was an orphan. She moved to St Louis, Missouri in 1889. She married several times. Sarah made up her mind to improve her Life. She worked in a drugstore and worked on her hair products. On January 4 1906 she called herself Madam C J Walker. She was the first black woman to become wealthy by earning money through her own business. In May 25 1919 at age fifty-one she died. This book was very interesting. You can become a self-made millionaire too.

Louis Armstrong Born July 4, 1900 His family was poor. He went to a reform school where he learned to Play Jazz. He played in Many Cities, and in the movie Hello Dolly in 1969. People on Called him “Satchmo. He died on July 6, 1971 in New York. I liked this Book because I like Jazz. I met Louis in person, and He played for President Richard Nixon and President Franklin D. Roosevel

Book Report on Harriet Ross Tubman by Lillie B.

Harriet was born between February or march of 1822. In the year of 1849, Harriet was a strong woman. Harriet want through the underground RailRoad to escape. The white woman hid Harriet In a small boat and wagon. Harriet worked the union Army for three years. The year of 1869, Harriet married a man name Nelson Davis. She was to this man for 19 years. A lady Name sarah Horkin Brad Ford wrote a book about Harriet Tubman. Harriet also opened a nursing home for the elderly. Harriet died in March 10, 1913, at the age of 91. I am glad to learn about people who was slaves back then.