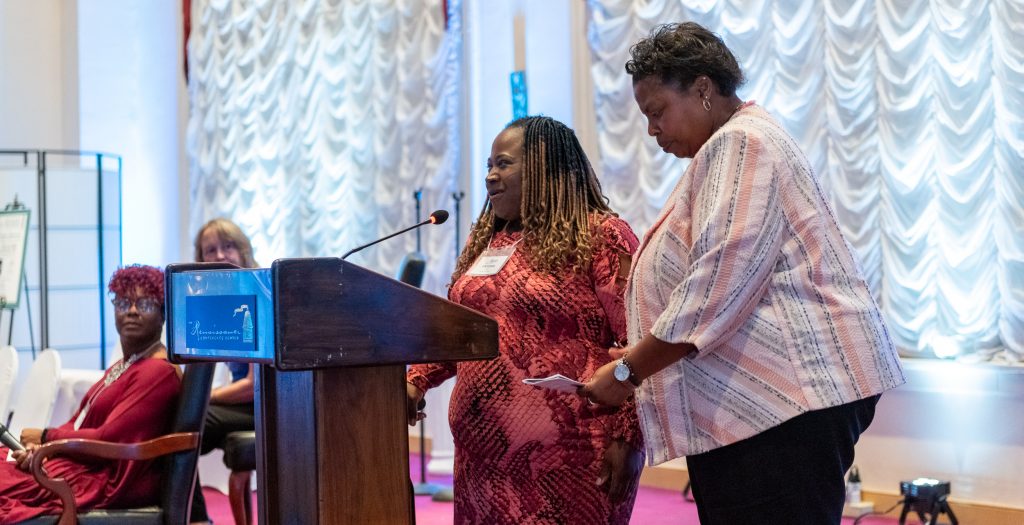 Fatima arrived in America in 1983. She was eighteen. Fatima did not know English. She only spoke Yoruba, the language she learned while living in Nigeria.

Upon arriving in New York City, Fatima lived with her aunt’s family. For the first few months, she took English classes at Fordham University. However, her aunt decided that Fatima could not continue with the classes because she wanted Fatima to stay home and work. In order to force Fatima to be the housekeeper, Fatima’s aunt prohibited her from learning English. She made Fatima cook, clean, and take care of children. This lasted for several years.

Fatima left when she married a man she met at church. She began working and attending English classes once more. Three children later, Fatima had to put her learning on hold so she could raise her children. She learned to speak English but still could not read or write.

In 2001, Fatima separated from her husband and took her three children to Richmond. They were homeless and lived out of a hotel while Fatima looked for a job and housing. Landlords kept turning her away due to poor credit from her time in New York. She had some savings but did not know she could access the money from anywhere.

Once Fatima found a job, she still struggled. She would wake up at 4:00 AM to get her kids ready for school, then work 12-hour shifts. She was still unable to read, but she was smart and resourceful. When she took a test to be a caregiver, she failed the first time. However, she memorized the answers she missed the first time and passed the second test.

Now, Fatima has three children who are in college or have graduated. Her fourth is still in high school. When the older children began to leave the house, they encouraged her to finally learn to read and write. She had sacrificed so long for them. “This is your time now. You go!” they told her.

A friend named Jean referred Fatima to READ. She began attending class in May 2019. She loves the way the class is taught. “[My teacher] pushes me. My writing is getting better.”

Fatima is now a big advocate for READ. She tells people about all she is learning and hands out flyers to friends. She does it because she believes the classes can help everyone who needs them. “This reading program… the way they help me, they will help other people!”

The READ Center is changing lives through adult literacy. For more information on how you can get involved with the READ Center, consider volunteering as a tutor or donating. If you or someone you know would like more information about joining our classes, learn how to become a student or call 804-288-9930.