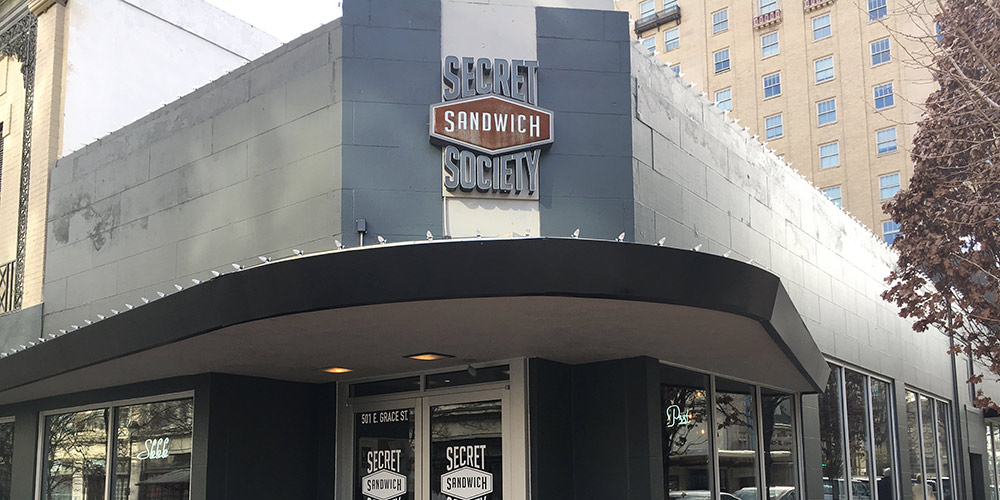 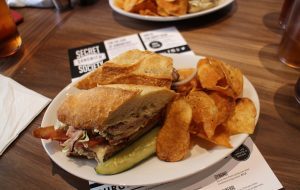 How do you get to know your way around?  Explore, of course.  My students knew how to get from their homes to class, but couldn’t name streets or intersections or tell me how many blocks to their bus stop.  I figured I could at least solve this problem for the area surrounding the Franklin Library, where my classes are held.

During our summer semester I floated the idea of a walking tour when the temperatures got a bit cooler, and my class embraced the idea.  So on October 2 we set out from the library, homemade maps in hand, walked to the corner, and stopped to mark the names of the two streets that make up the intersection of Franklin and 2nd.  Then we turned south—yes, we’re leaning directions too—toward the river, added Main Street to our maps, and crossed 2nd.  Here is where the journey got exciting: we added the name of Chef Mamusu’s Africanne on Main to our maps.

Proceeding east on Main, we stopped at the next corner to record 3rd Street and, of course, 3rd St. Diner.  One of the eatery’s employees came out to ask us what we were doing, and we chatted with her for a few minutes.  I asked the class what they thought the name of the next street might be, but they hadn’t figured that out yet.  However, when we got there and they saw it was 4th Street, they were then ready to predict the next two streets before we turned north.  Before proceeding, however, we stopped to record K-Town Kitchen & Bar.  Sleek and fashionable inside, this place got the better of my crowd, who stopped to stare in the window and discuss the décor.

At 6th Street, we rounded the corner to encounter Café Olé, the fourth eatery on our list of landmarks.  Then we proceeded up 6th, stopped at Grace to record the street name, and headed down to Secret Sandwich Society at Grace and 5th.  Then we crossed 5th to Pop’s Market and headed across Grace and a bit west to Pasture and its neighbor Wong Gonzalez before heading back to the library, where we checked our maps with slides I had made of our journey.

For the next class, we headed to the second-floor computer lab, where each student researched a different restaurant to determine the type of service, the type of cuisine, and the price range of the offerings.  Strangely, the library blocked Wong Gonzalez, so two students doubled the research on one establishment.

The following week each student reported on their findings.  They decided they didn’t think a buffet where they wouldn’t know the cost till they got to the scale at the register was a good fit for people on a budget of $15, and that eliminated one of the eight eateries.  Then they declared rather unanimously that they preferred full service to ordering at a counter, which eliminated two more establishments.  A few were willing to try something they’d never had before, such as Korean food, but most preferred American, and that preference, along with the looks of the restaurant, brought us to Secret Sandwich Society.

After that class I met with the manager, Jason Bell, who was very happy to host our “class trip” and was willing to accommodate us by waiving the usual mandatory 18% tip so that each of my students could pay his/her own bill by adding on a tip based on the service.  With his card in hand and about a dozen paper menus, I was already thinking about lessons on reading the menu, understanding the choices, and deciding what would fit the budget.  We added tax and first a 15% tip, followed by a 17.7 % tip (because an $11.50 sandwich with tax and such a tip came to $15 even).

One student chose a $10 meal and chose to drink water, but most wanted to order a soft drink and a few wanted something more expensive than $11.50 and were more than willing to add a few dollars of their own.

So two and half weeks after our walking tour, we met on the library steps and walked to Secret Sandwich Society, meeting one of our fellow diners there.  Jason had prepared a row of tables down the center of this narrow restaurant to accommodate our party.  All chose seats, the tutors and I being sure to space ourselves among the students.  Hiram sat at the head of the table.  Kelly, our server specially chosen by Jason for us, greeted us and brought us water and, as we were prepared to order, patiently went from one to the next of us, asking those with hamburgers how they wanted their meat cooked (all chose “no pink”).  Calvin ordered the General minus the tomato and

Thousand Island dressing.  Rashad ordered the Lafayette with an upgrade to fries.  Lavado ordered the General

without onion.  And so on down one side of the table.  Although I could not hear the orders at the far end, I knew Momaht did fine ordering the Eagle minus the mortadella.  Tim chose to order a burger with very specific instructions, which included cutting it in half.  Last, I ordered the special sandwich of the day, eggplant with pesto, with an upgrade of butternut squash soup.  Kelly was incredibly patient with us.

The drinks came quickly, and we all chatted about how nice the décor was, what a bright sunny day it was, and the usual chit chat folks having fun will engage in.  When the food arrived, however, talking stopped as all took in the looks and the smells of our repast, uttering various expressions of appreciation, Rashad and Lavado taking pictures of their meals before eating to show to their mothers.  Audible expressions of enjoyment ensued as folks began to partake of their meals.  Though I was at one end of the table, and not part of their immediate conversations, judging by their plates, I know Jammar, Hiram, Momaht, and Gerome were very satisfied, and surely so were tutors Marylee and Marcia and tutor assistant Patrice.  All at my end were equally as happy, Calvin opting to take half of his burger home for his mother.

All received individual checks; all included 17.7% tips and rounded to the nearest dollar (equaling 18% or slightly better); and a couple of us left extra to show our appreciation to Kelly for her attentiveness to our needs.  Lavado had to go to work; Jammar had errands to run; and shortly all were on their way out when Alease arrived just in time to order the General to go.  Once we knew she was set, Marcia and Marylee and I made our exit to conclude a perfect outing.